One of the things the BloodHound team has been talking about for quite a while now is adding GPO and OU objects to the BloodHound schema. With the 1.5 update, this is finally a reality. BloodHound 1.5 introduces the ability to collect the structure of domains, including GPOs, what OUs those GPOs apply to, and what objects are contained by the OUs. ACL collection has been modified to collect controllers for GPO objects. This will allow you to explore new attack paths, including modification of GPOs to affect objects further down the tree.

The new Container collection method will collect GPO and OU objects in the domain and output two new files: container_structures.csv and container_gplinks.csv. These files contain all the information on how the domain’s containers are structured, allowing you to build a graph to examine these new relationships. 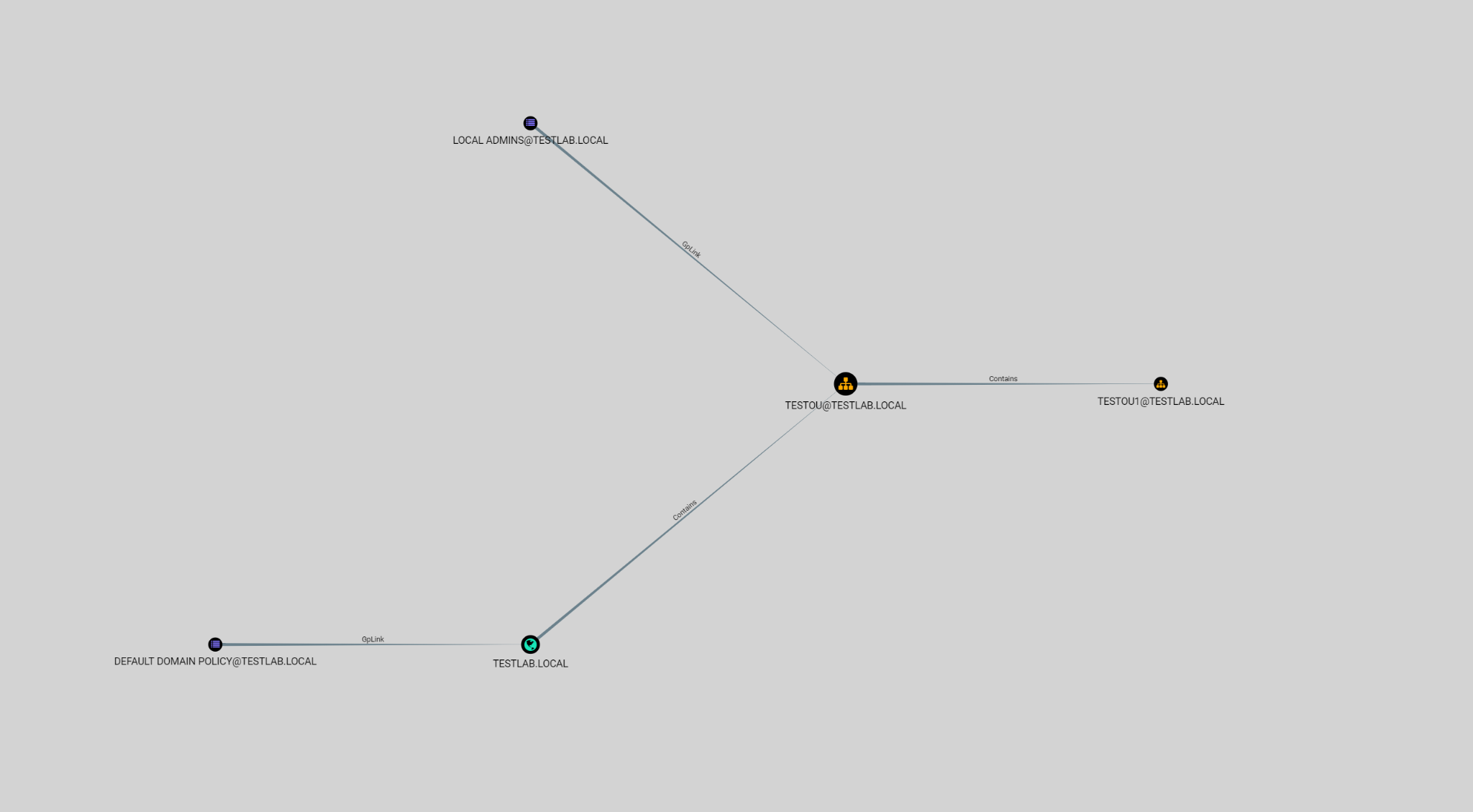 Collecting container structure and gplinks is a relatively quick process and only uses LDAP requests to collect all the required data.

By popular demand, we’ve finally introduced the All collection method, which as the name implies, will do all forms of enumeration. Enumeration is done in the following order:

A great way of doing all the collection and getting the data with minimal leftover artifacts is using the following command:

This will perform all collection methods, compress all the CSVs into a timestamped zip file, and remove all the CSVs after it’s completed thanks to the new RemoveCSV flag. If you want, you could even add the NoSaveCache flag, to remove the cache file from disk as well.

The above command will run ACL collection followed by Object Property collection.

SharpHound now has throttle and jitter options to slow down and vary the timing of requests made to computers. If you’re worried about network load or detection based on quick hits to multiple computers, these options might be useful for you.

The above command will introduce a 1.5 second delay after each computer request, with a 10% variance in the delay.

Unfortunately, we’ve made the decision to deprecate data collection using the Neo4j REST API. The amount of work required to keep the feature properly supported was deemed not worth it compared to the number of people actually using the feature. Additionally, CSV ingestion is faster, and easier to manage. Historically, we have always recommended people use CSV ingestion anyways to make sure that a copy of the data is retained in case there’s a bug in the user interface. As of the 1.5 release, we are no longer supporting the REST API method of ingestion. The entire ingestion method will be removed in a future release.

If you choose to use the REST API in its current form, keep in mind there might be bugs, and Container collection is not supported or implemented.

One of the coolest features in BloodHound is the ability to visualize cross-domain data. Unfortunately, due to a misunderstanding of the way that Active Directory stores references to group membership, we were improperly collecting this data. The new release of SharpHound has been rewritten to properly collect all group membership data, including Universal and Domain Local groups, which were not being properly ingested. Additionally, we identified an issue where the LDAP query for groups was timing out in the middle of collection. We’ve upped the default LDAP timeout on our connections significantly, so this should no longer be a problem. For more information, you can see this GitHub issue.

In addition to this group membership fix, we found out that Domain Local and Universal groups in local admin collection were also not being properly collected. We’ve also corrected this issue. The end result of these fixes is more accurate data. If you want more information on these groups, you can check out @harmj0y’s blog post on the subject.

A reported issue was that the ComputerFile collection method didn’t work. The solution to this problem ended up being a weird one, where ping checks took longer when loading from text files as opposed to LDAP. A fix is implemented that will up the default PingTimeout in SharpHound when the ComputerFile option is selected.

At some point, the SessionLoop collection method was broken. Specifically, the part that calculated when the session loop would end was completely non-functional. That bug has been fixed, so it should work again properly.

We identified several scenarios that resulted in improper ACE collection and ingestion in the interface. A big part of this fix was properly ensuring that the inherited object type of an ACE matches up with the object type actually being enumerated. Previously, this was resulting in false positives when an ACE was set to, for example, “Descendant Group Objects” on a container that contained more than groups. We’ve taken steps to fix these issues, which should improve the accuracy of data collected and pathfinding.

The vast majority of the changes made in 1.5 are in the user interface for BloodHound, and we have several new features to look at.

To support the addition of containers, we’ve added GPO and OU nodes to the interface. Both types of nodes have their own data displays, similar to existing nodes.

GPO Nodes and the GpLink Relationship# 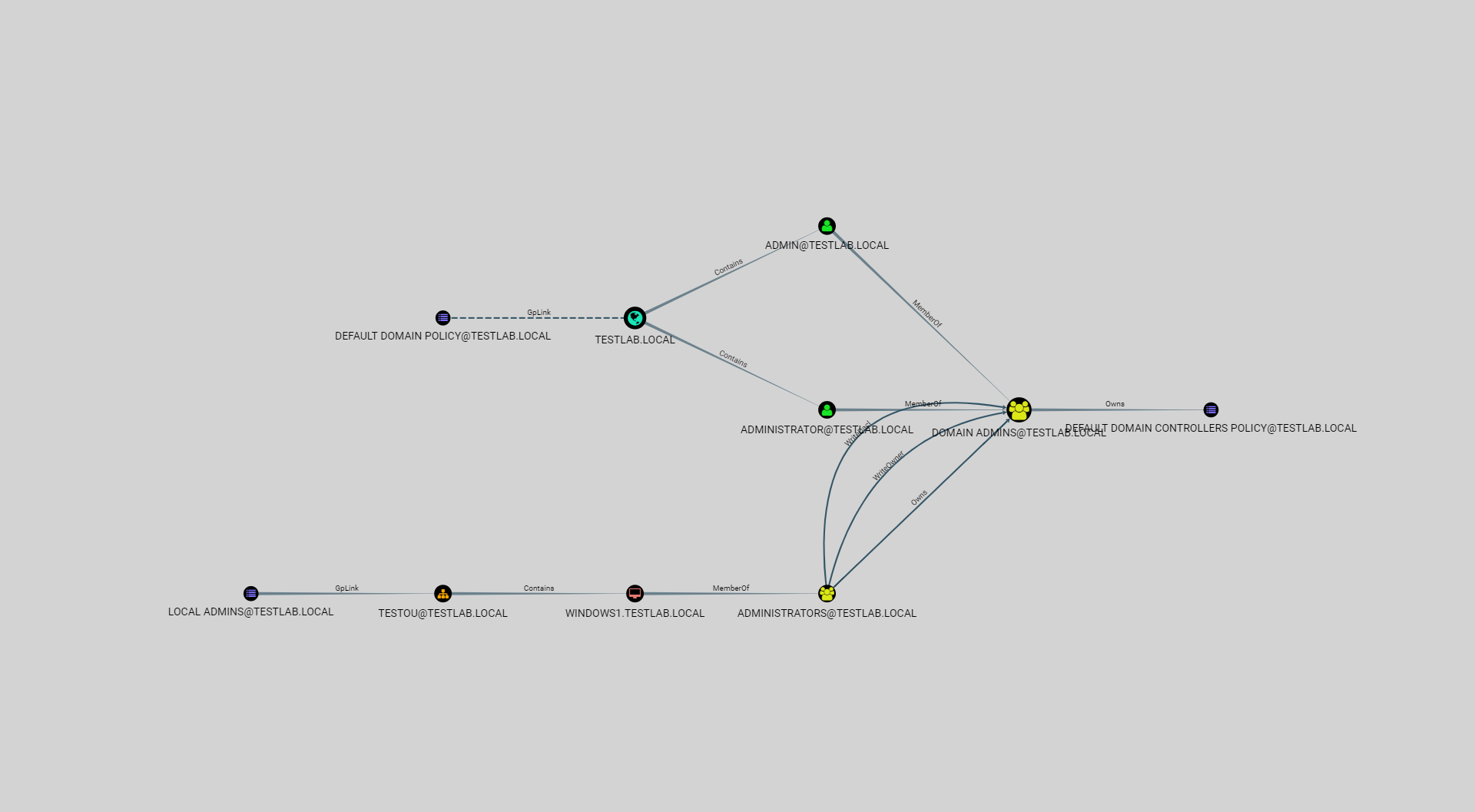 Unlike most nodes in the BloodHound schema, GPOs are indexed using their GUID, instead of their name, as GPO display names are not guaranteed to be unique. Clicking on a GPO node will give you the following information.

The query allows you to visualize what objects are actually affected by the GPO, which will allow you to determine what users and/or computers will be affected by modifying the GPO.

OU Nodes and the Contains Relationship#

OU nodes are container objects that allow for management of different units in Active Directory. OU nodes are generally used in conjunction with GPOs to allow delegation of privilege or organization-specific changes to groups of users or computers. OU nodes can block inheritance, which prevents GPO settings from being inherited from parent OUs. Similar to GpLink relationships, the Contains relationship is represented as a dotted line if the OU blocks inheritance. Domains are also container objects – similar to OUs – and have the Contains relationship. They serve as the top level container. 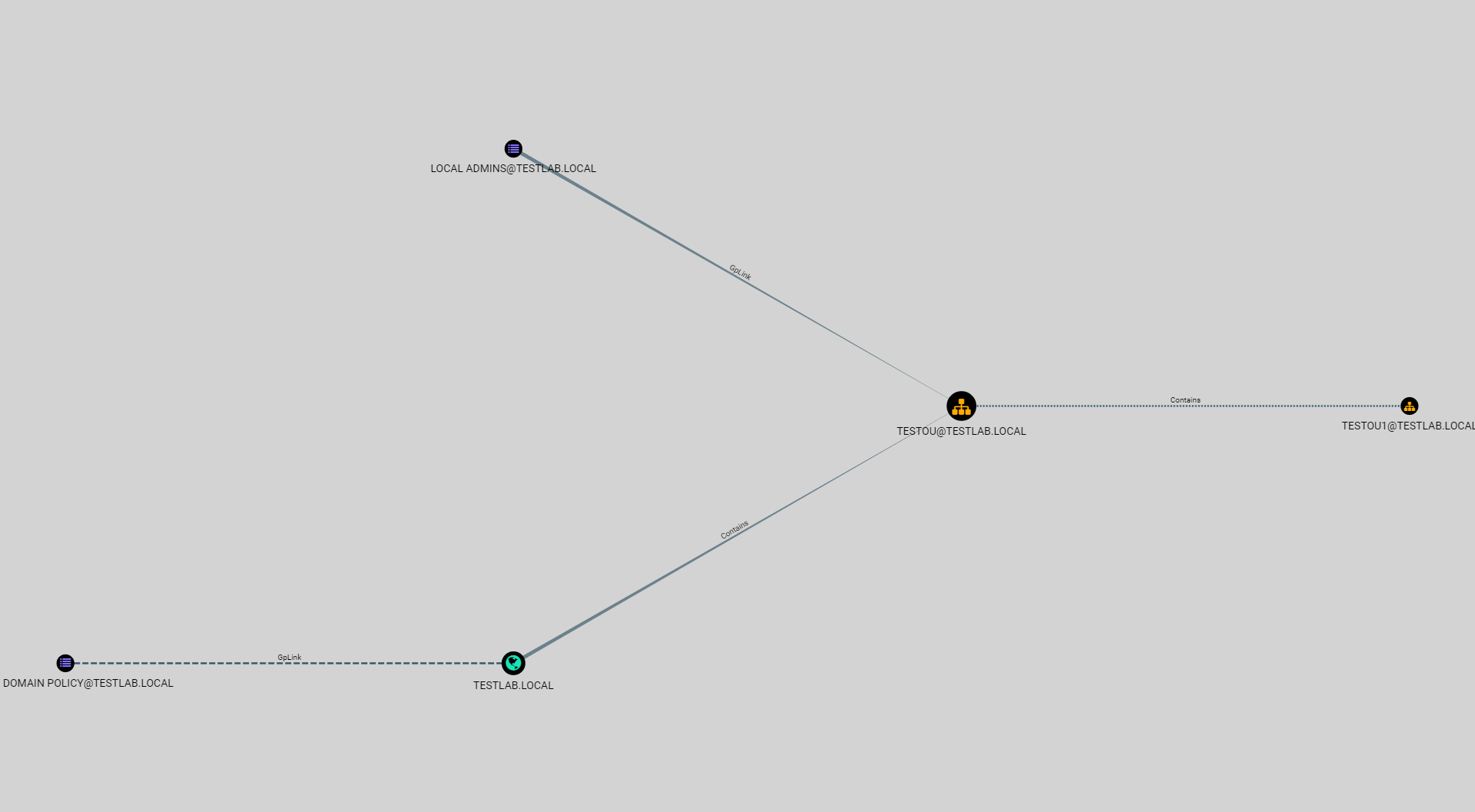 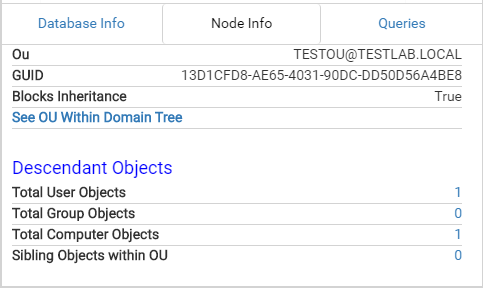 We’ve also added the Owns relationship to the user interface, which indicates a principal that is the owner of another principal. 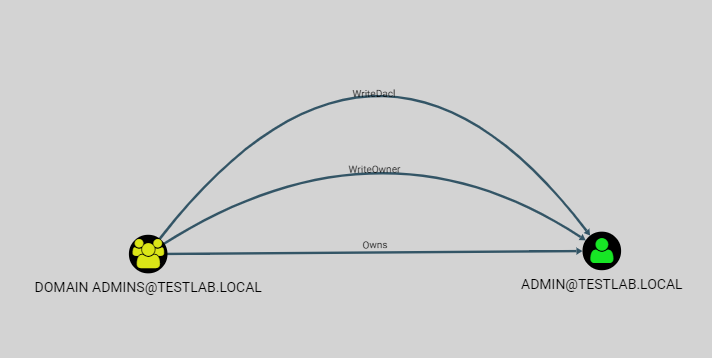 The owner of a node by default can modify any property on an object, even if not explicitly granted full control. The Owns edge is essentially the equivalent of GenericAll.

We’ve upgraded the stock search and pathfinding bars in BloodHound, allowing you to specify the type of node you’re searching for in the search bar. By prefixing your search term with a node label, similar to the way you would in Cypher, you can filter your search further. Additionally, we’ve added the ability to search for OUs and GPOs by GUIDs to allow you to find the right node. 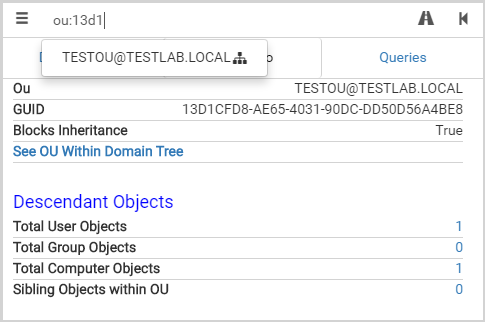 Upgraded Pre-Built Queries (And a couple new ones)#

We’ve upgraded the pre-built queries as well to make them more robust and flexible. Pre-built queries can now have any number of filtering steps as needed. Additionally, as shown in the gif above, you can display extra information on the nodes displayed, such as PwdLastSet, which is an important factor when deciding which user to target for kerberoasting. Unfortunately, the format of pre-built queries has changed, which means if you’ve made your own custom queries, you’ll have to re-write them to the new format, which should be easier to use.

The new format takes a list of queries, with the last query marked as final to tell the UI to graph the query instead of displaying a selection box. Adding properties is as simple as returning the properties in the query, the user interface will do all the work of mapping the properties to the display. The previous values such as allowCollapse and startNode/endNode are still usable. 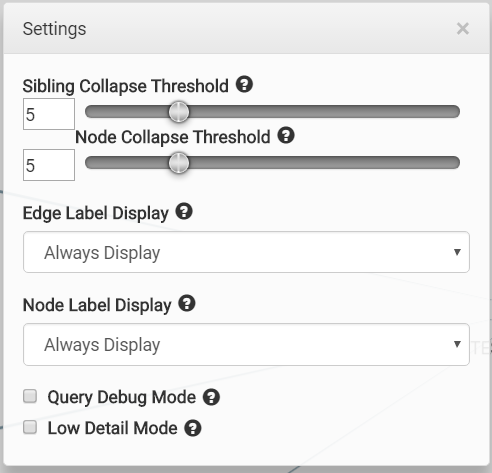 We’ve added more options to the options menu to help you control the UI’s behavior. In particular, we’ve added options to control how the node and edge labels are displayed. The ctrl shortcut is still available for node labels. These options are also persistent, and will save, so you won’t have to keep setting these unless you change them. 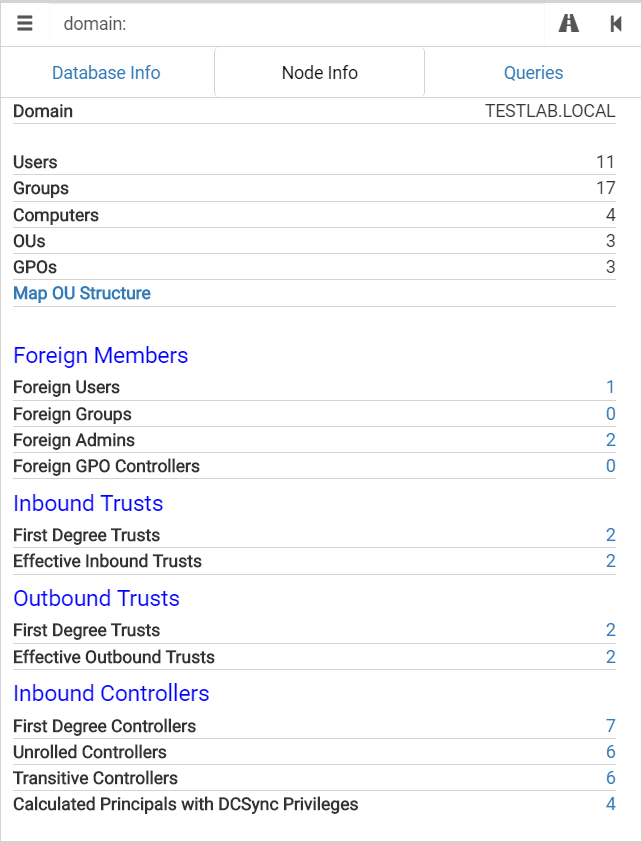 We’ve added more data to the Domain nodes, and fixed up the queries on these displays as well. With these additions, it will be easier to locate foreign members of domains that you’re interested in. We’ve also added ACL relationships to the domain nodes, which will allow you to quickly view any controllers for the domain object.

We’ve modified the ingestion of CSV files to add a new property to nodes, which keeps track of what domain a node belongs to. This allows you to more easily write queries for cross-domain nodes by leveraging this new property. We use this in some of our pre-built queries.

To get this property in existing data sets, a re-import of the CSV files will be necessary.

BloodHound 1.5 represents a large milestone in the BloodHound project, and we’re hoping the new release will open up new avenues of attack analysis and interesting new paths for compromise, as well as help give the best possible recommendations for both offensive and defensive teams. We also hope that this new release will solve any issues that people might have had in the past.

You can grab compiled versions of the project here or compile it yourself from the BloodHound repository here.

As usual, feel free to join us any time in the BloodHound Slack Channel. The link will allow you to get an invite, and join our active community with over 1200(!) users. It’s also the most direct way to get in touch with us for BloodHound issues. We look forward to hearing from any new users and hopefully making BloodHound better for everyone!

Thanks to all our beta testers who helped ensure that 1.5 was (relatively) bug free. Special thanks to @Crypt0-m3lon for a pull request to fix several issues with the beta.